Old Timber Inn Fish Logs a Must Have 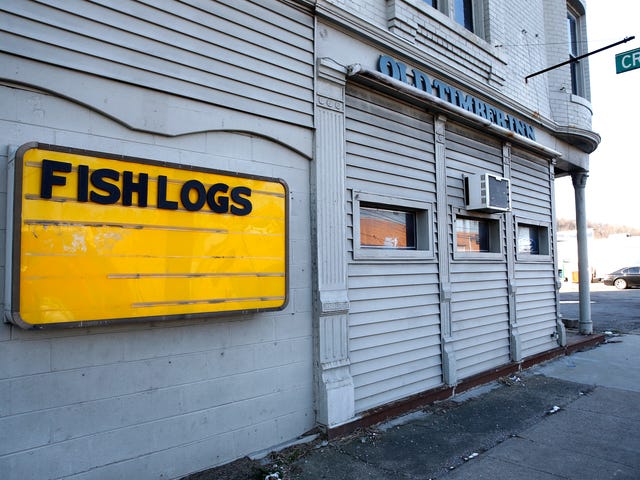 Fish logs are made at the Old Timber Inn on Spring Grove and Crawford Avenues.
CARA OWSLEY/THE ENQUIRER

My boyfriend and I came to Cincinnati in a random, almost rash way, without jobs or friends. He’d been in Bloomington, Indiana, I’d been living in New York City for four years. We didn’t know if we’d stay here or not. Maybe just for a few years, while our life plans became more clear.

Our apartment in Clifton had views through floor-to-ceiling windows looking toward the zoo. We could hear the gibbons making their siren-like cries. Every night we sat close to each other on a couch his parents had given us.

I was happy to be with him, and to be back in the Midwest, charmed by how people here waited for the walk light before crossing the street, and how my eyes met green instead of concrete.

I did miss the excitement of a big city, and there were things here I didn’t understand, including what there was to eat.  A butcher on Ludlow Avenue sold something called Goetta. We tried it and it wasn’t hard to like. There was no good French bread, but I discovered Virginia Bakery’s butter bit rolls. I was initiated into ways at the Ludlow Avenue Skyline and was perfectly willing to adopt an allegiance to this strange form of chili. Graeter’s ice cream took no cross-cultural understanding to understand 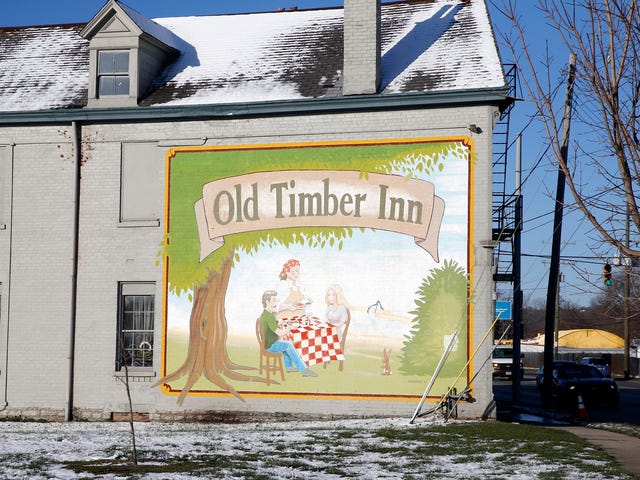 But we often passed a sign on Spring Grove Avenue that made no sense to me.

We’d see it when driving over to visit our only friends, a couple from Bloomington who had moved here just before we did. They lived in one of those hidden enclaves that you come across in Cincinnati. They had an old farmhouse on Spring Lawn, surrounded by tomato gardens and greenhouses, the remnants of Northside truck farming.

I watched their little boy while the other three played music together. My boyfriend and the husband of the couple started a band. 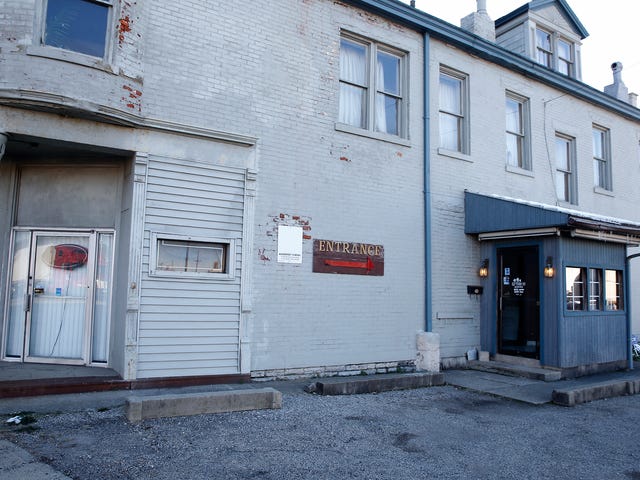 Just before turning off Spring Grove past the cemetery to go to their house, we would pass the Old Timber Inn. The sign out front, the kind on wheels with movable letters,  made me feel I was somewhere I’d always be a stranger. “Fish Logs St. fries,” it said. St. fries were steak fries, I deduced, and logically, a fish log is just a big fish stick.

It just seemed sort of embarrassing. Why would you call it a log? We said we should try it, but The Old Timber Inn wasn’t the kind of place I felt comfortable walking in. If you’ve seen it, you know what I mean. The parking lot was full of junk, the building was covered with faded gray paint, the mural on the side was peeling. Too run-down and dodgy to inspire confidence.

My boyfriend and I got jobs. We got married, bought a house in Pleasant Ridge. Then I quit my job, started freelancing, got pregnant. We made more friends, many who lived in Northside. One couple we made friends with had a son who was our first daughter’s age, and the wife and I were due at almost the same time with our second children, both girls.

They had big, unruly Passover seders and the kind of party that lasted for hours while the parents let the kids run off upstairs. Their friends who lived around the corner had two girls our girls’ ages and they had us over to hang out a lot. Parties were our cheap entertainment, so we were always on a way to one when we passed The Old Timber Inn and never stopped in for fish logs, even when the mural got spruced up.

The greenhouse couple moved, and then out of the blue, to me at least, they got divorced. Even more surprising, the seder-giving couple split up. The friends around the corner moved to Virginia with their girls. Later they divorced, too.

We shared the passionate project of our life, raising our daughters. I got a job at The Enquirer, we grew into our careers, bought another house in Pleasant Ridge then moved to a third. We worked out the difference between my proclivity to spend money and his to save it.

The remodeling of a couple of kitchens and driving on the wrong side of the road through Scotland did not break us up. We got the kids a dog, supported each other through the death of his parents and my father. The dog died. The kids went to college and didn’t come back, at least not for long.

We were reminded over and over how profoundly strange one person can be to another, no matter how well they know and love each other. Embracing the differences and letting them be became the one secret of marriage I can pass on. We’re still together not because we did something better than other people. We just kept going. And we’ve had a lucky, lucky life.

Cincinnati has become thoroughly our home. We don’t go to Mass or Reds games, but we have a community that’s unique to this place. People can’t ask me where I went to high school, but I can tell them my kids went to Walnut Hills, and that connects me to a lot of people. I have been chronicling the food of my adopted town for 20 years now, and I’ve tried most of the things that used to seem weird to me… Except a fish log.

Finally, we went. Some 32 years after passing that sign, we found a time, during Lent, though not on a Friday. We parked in the lot, among abandoned vehicles and scrap metal, walked through the weathered front door to the bar area. Owner Elmer Ferguson was serving Bud Lights to a small group of guys. A black and white Western was on the TV, there was a stuffed marlin over the bar, and a big recliner in the corner.

It was just what I imagined it would be like. I got the fish log, the whole, not the half. Neil got a burger.

Elmer told us about the photo that supposedly shows Jesse James drinking at the bar in 1872, another of the traction railway that went from here to Lake Erie. The building, he said, has been here since 1845.

“Have you owned this place long?” Neil asked Elmer. Elmer looks like he’s been standing behind the bar forever, like there’s no other place he could be.

The whole fish log, with hot slaw and steak fries, at The Old Timber Inn in Northside
ENQUIRER/POLLY CAMPBELL

He brought me hot slaw, cut into long strings with a big handful of crumbled bacon on top, with a hot vinegar dressing and my fish log. It took up half a dinner plate, golden-crusted, pearly white inside, and with two little lemon twists riding on top.  It was, I can truthfully report, delicious.

Old Timber Inn is open during the week only, from 10 am.- 8p.m. Monday-Friday. It may be open on weekends starting in May, including a new beer garden out back. 4330 Spring Grove Ave.